The publication, which is focused on covering all things that youth want to know and should know, released the jubilee edition of The Straits Times IN to spark new ideas among students. The publication was a hit amid students and adults alike; it was really an eye-opener for most. A student Tan Yi Fang Joycelynn, 15, was greatly amazed and impressed to find out that Carousell, a smartphone app that she had been using for online purchase and sale was actually a Singaporean invention. There were other amazing inventions like the Rotimatic – an automatic roti (Indian bread) making machine, which could be a boon for families in India. 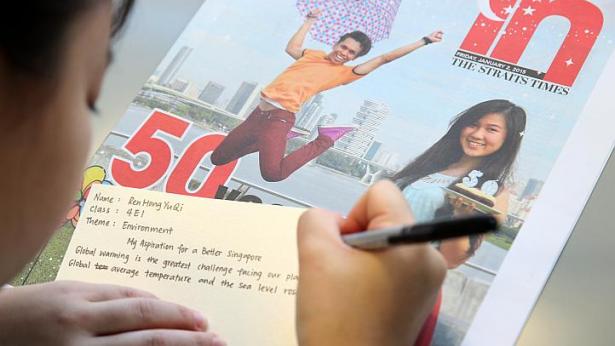 Many homegrown inventions including Carousell where featured in the special edition of the IN, which Education Minister Heng Swee Keat read at the Yio Chu Kang Secondary, during character citizenship education lesson while sitting with a group of children.

The Jubilee edition of the weekly magazine were circulated amid almost all secondary school students and in schools across the nation. Along with the special edition, a primary school counterpart of the edition – the Little Red Dot was also circulated. The magazine addition managed to achieve its goal of educating and effecting the students’ life and many children wrote in responses to how they could make a difference and how they could (or want to) contribute to the future of Singapore. The students presented their ideas within groups.

The Straits Times IN’s jubilee edition was launched by Mr Heng Swee Keat in Yio Chu Kang Secondary as in ceremony to kick off the SG50 activities – events to celebrate Singapore’s 50th birthday.

In his event opening speech Mr. Heng appreciated the Straits Times IN initiative and said –
“Good materials like IN help students connect with Singapore and our society and stimulate them to think about what they can do to be active citizens; to make life better for people around them.“